I can’t quite believe the third week of January is already gone. I did achieve a few of my “work” targets, just not quite on the days planned, and , well, my “self-care” targets were out the window for no good reason. My excuse for not meeting my planned goals for week 3 can’t be the same as last week, as I wasn’t ill at all this week. Ug. Oh well, at least I am here again reporting on it.

Weather wise it was mild all week. You know you are a gardener in Alberta in Zone 2 when +4C in January puts dread in your heart and you start praying fervently for 10 cm of snow. I’m serious. All this warmth is lovely, unless you have beloved perennial plants that rely on a good snow cover to keep them safe until spring. This week my mulch started showing even on the beds that I had shoveled extra snow on to keep them well insulated.

Exposed mulch means even more rapid melting, due to a property of all surfaces called albedo. Albedo is the proportion of light or radiation (in this case solar radiation) that a surface or body receives that is reflected back. In other words: the whiter a surface is, the more solar radiation it reflects back to the atmosphere. The darker a surface or body is, the solar radiation it absorbs. This principal is used by urban planners and architects as it has been found that buildings with green roofs or buildings with roofs and other surfaces that are painted white (in hot climates) use less energy on air conditioning, 32 to 100% savings according to Younos and Paerce (Younos, T. and T.E. Parece. 2016. Sustainable Water management in Urban Environments. The Handbook of Environmental Chemistry. ISBN 978-3-319-29335-6. Springer International Publishing 2016. Pp 196-197).

So when the ground surface goes from snow covered white, to having leaves or exposed mulch, more solar radiation is absorbed, making the area warmer, melting more snow, exposing more of my nice dark mulch, which then gets warmer and melts more snow, and so the melting cycle accelerates due to the changing albedo (or % of dark material – not dark matter 😉), of the exposed surface. Hence my prayers for 10 cm of beautiful white fluff to reinsulate and reflect solar radiation off of my perennial beds. I would appreciate any and all prayers for snow, snow dances, snow vibes etc. that you can send my way (and the way of any gardener who is panicking like I am)
Ok, enough about weather. Although really, in farming/gardening that is everything… I will move on, however.

Seed starting: Lisianthus
This week I was scheduled to seed my lisianthus.  Lisianthus have lovely rose-like blossoms that last for a long time in a vase. The reason I know this is that I was able to grow one, yes one very short-stemmed ONE, last year, out of a seeding of 50. I gave it to my mom and it opened up beautifully and lasted 10 days. Yes, she changed the water daily, but she did not use flower food. It should be noted that my parents don’t ever turn on their air-conditioning, so it is often 25C in their condo in the summer.  In other words, lisianthus, when you can get them, are a great cut flower!

Oh, and did I mention, lisianthus also need a very long lead time to bulk up to the stage where they bloom? Like 6 months of lead time. Ug.  This means in Zone 2 here in Wildwood, they need to be started in January for blooms in August.  But they are so lovely and so durable in the vase, that I must master the art of growing them.  So, I set to work in my sunroom preparing the first soil blocks of the year, specifically for the lisianthus. I was fairly proud of myself at being able to get back into the knack of preparing soil blocks after being away from doing it for 6 months. I will post more on soil blocks later this spring. 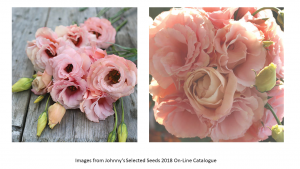 I am trying Arena Apricot this year. I am only trying 50, and I bought the seed, pelleted, from Johnny’s Select seeds (http://www.johnnyseeds.com/flowers/lisianthus/arena-iii-apricot-pelleted-f1-lisianthus-seed-1972P.html?cgid=lisianthus#start=1). The seeds are tiny, so the pelleting makes them easier to plant, but I still needed to use the toothpick method to place them in the soil blocks. 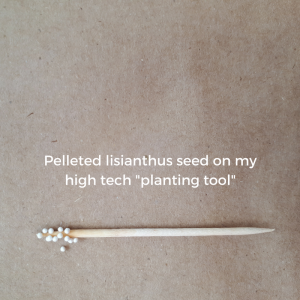 After seeding the lisi’s I checked on the perennial seeds I that have been subjecting to a freeze/thaw cycle in my fridge for the past 2 weeks (yes it was supposed to be only 1 week, but there’s one of the missed goals I mentioned earlier).   Well, it was clearly time to get at planting them in some soil because the Lupinus perennis had  germinated in the moist towels in the fridge! So I potted those up (in organic potting mix mixed with organic fertilizer) and seeded the other perennials into the remaining soil blocks in the tray the 50 lisi’s went into. I may regret this in a few weeks if the perennials start germinating well ahead of the lisi’s, but this is what I did. I may also regret using several layers of paper towel under the soil blocks as the moisture wicking medium. I didn’t have any of the industrial shop paper towels my awesome seed starting friend Laura @sowfresh uses, and I also had not washed the expensive wicking fabric I had bought and trialed last year (it worked like a charm, btw, but it is not cheap). I will be washing the wicking fabric and trying it on my next round of seeds, because I don’t like using paper towel, even though it can be composted (not sure about the shop-grade stuff though). The tray of soil blocks all went on the heat mat, with a humidity dome, under lights, as lisi’s need light to germinate.  The perennial seeds that don’t need light were covered with vermiculite.

Seed Starting: Perennials
Sadly I lost 75% of the Eupatorium rugosum seedlings that had emerged last week because the surface dried out overnight on Tuesday. This was my fault as I failed to mist them before I went to bed. Since I had lost a perovskia seedling last week to damping off, I figured I would go a bit drier on the watering this week. However, with such very tiny seedlings (they are barely 3 mm high and definitely no more than 1 mm thick) they are so susceptible to drying out AND to rotting. This is the delicate balance you have to figure out. Which is why the old cliché “practice makes perfect” is a cliché. It is true. These are hard lessons to learn when you have limited seed and limited time.
Here is the current status of the seedlings:

Cuttings
I forgot to mention that at the end of December the coleus I was trying to overwinter was looking really bedraggled. It was continuously infested with aphids, despite being sprayed with safer’s insecticidal soap every 3-5 days. I was coddling it the best I could, but finally decided to put it out of its misery. Before I did I took cuttings from all the growing tips. I placed them in glasses containing water (deionized water, as our well water has levels of ions a bit that prevent it being suitable for irrigating or water inside plants). The cuttings have been sitting in those glasses in one of our sunny south facing windows for about a month. I checked the other day, and lo and behold, roots had started to form at the bottom nodes on all the cuttings! So I potted them up yesterday in organic potting mix diluted with approximately 1/3 more (volume) of perlite to ensure excellent drainage. I put them in with the potted up Lupinus, under a humidity done and on the heat mats.

I really hope they thrive as this is a beautiful coleus that I received from one of the ladies in my garden club. I looked high and low for seed for it, but found none. It is unique because its upper surface is a lovely uniform lime green and its bottom surface is a uniform burgundy. If you know of any varieties like this and where I can get seed, I would greatly appreciate if you let me know. 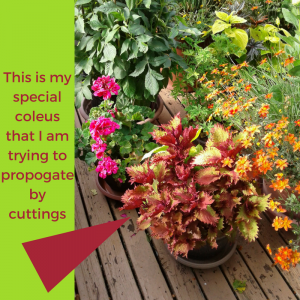 Well that about wraps it up for the third week of January 2018! See you here next week!